I recently got an email from the Autism Society about advocating against unnecessary seclusion and restraint. As a read one of the mother's story about what happened to her child, I had a brief flashback about my own experience.

Seclusion and/or restraint is not as uncommon as people think. I remember taking my son to a new school right before I referred him for special education evaluation. The school had just opened that year and I had taken a position as the sole special education teacher there. It was a complete nightmare as, almost immediately, I was approached about my son's "behavior. " He wasn't able to sit still...he wouldn't take a nap...he cried. I explained that I suspected that he had autism as if my words would somehow make them understand. I quickly found out that people really don't care when something or someone did not fit into their "ideal" way of life.

My son was soon transferred to another classroom. The teacher was initially very supportive, impressed by my son's extensive vocabulary and ability to fluently read. I felt a sense of relief and thought things were going to work out after all.

Then one day, out of the blue, the bottom dropped. He required too much effort. He wasn't able to retain information. I was heartbroken when I saw him sitting behind a whiteboard away from his classmates or outside in the hallway. I lost my appetite and sleep knowing every day that I was delivering my son into the hands of a teacher who had total disdain for him and kept him as far removed from her other well-managed students as possible.

After three weeks, I quit my job and withdrew my son. I was lucky because I knew what was happening to my son but the use of unnecessary seclusion/restraints is sometimes done without parents knowing anything about it. It left a lasting impression on my child, who developed a dislike for school that continues to this day. 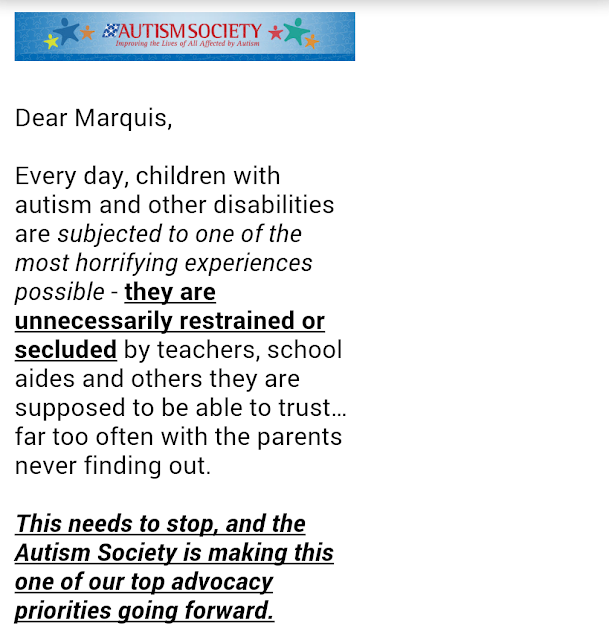