Improve Access to Healthcare and Insurance Coverage for Children with Autism

As the mother of two boys with autism, I understand how frustrating it is to have to fight for basic needs for the care and support for children with disabilities. With the lifetime cost of caring for individuals with autism can range from 1.4 million to 2.4 million dollars. Many insurance companies refuse to provide coverage for children with autism. Most families cannot afford to pay out of pocket for needed therapy services, leaving them either financially strapped or foregoing the therapies altogether.

I have started a petition on Change.org to advocate for greater access to health care services and mandates requiring insurance coverage in all states for children with autism.

There is a great article by Drs. Charles and Elizabeth Schmidt for couples who are parenting a child with a disability. You can access it by clicking the link below:

http://www.yourtango.com/experts/dr-charles-dr-elizabeth-schmitz/special-needs-children-can-challenge-your-marriage
Posted by Global Special Education Initiative at 9:25 AM No comments:

I am conducting a survey about individual perceptions of autism. Results from the survey will be collected, analyzed and reported in order to improve research and perceptions as well as raise awareness about autism spectrum disorders. Please take a few minutes to provide responses by accessing the following link:

Your participation is greatly appreciated!
Posted by Global Special Education Initiative at 8:24 AM No comments:

1. Autism impacts individuals in different ways. Even when looking at gender, autism seems to manifest itself differently in boys than it does with girls.
2. Research suggests that thousands of gene mutations could explain the variances among people with autism.
3. Autism was first described in 1911 by Swiss psychiatrist Eugen Bleuler. He used he term in reference to patients with schizophrenia and, later, the term became associated with children who were exhibiting behavioral difficulties.
4. The word autism is derived from the Greek word "autos" which means self. People with autism have been noted by be isolated from social interactions.
5. More boys than girls are diagnosed with autism. This could call into question whether more boys than girls actually have autism or if it is just a matter of boys having a greater probability of receiving a diagnosis due to gender biases.
6. Some studies have indicated that children with autism have at least one parent with characteristics of autism.
7. The risk of a sibling having autism increases by 30% or greater if another child in the family has been diagnosed with autism.
8. Parents of children with autism have elevated stress levels similar to that of combat soldiers.
9. In some cultures, mothers are blamed if a child is diagnosed with autism.
10. There is no cure for autism. However, effective interventions can decrease the severity and scope of autism.
Posted by Global Special Education Initiative at 2:17 PM No comments:

As the mother of two children with autism, special education teacher and disability advocate, I am always looking for resources not only for my own children but to share with others who are involved in the lives of children with disabilities on a personal or professional level. I am always looking for ways to promote and support disability awareness, so when I come across something great that does both, I am more than excited to pass it along!

The books can be individualized not only to include the child's name and birthday, but also discuss their hobbies and interests before discussing their special needs.
Pseudonyms and other fictionalized information can also we be used to provide a more generalized platform for parents and teachers who want to address disability awareness and acceptance as part of a character development curriculum. Someone Special Uniquely Personalized Books also have books for diabetes, epilepsy, food allergies, vision/hearing impairments, cerebral palsy, and physical disabilities.

Posted by Global Special Education Initiative at 1:01 PM No comments:

I was reading a Facebook post about the lack of media coverage for the Disability Awareness Day parade that recently took place in NYC. Unlike the fanfare experienced by participants in the recent LGBT parade, the parade recognizing disabilities was met with considerably less interest.  I realized unequivocally one crucial fact: we are NOT there yet! Society has yet to find a place for individuals with disabilities...so it is up to us to blaze a trail; to push our way to the top so that disability awareness and acceptance becomes a front- line issue. We cannot wait for others to take up the cause and "do the right thing." This is our fight and we have to become passionate about it if we expect to see real change being made.
#disabilitypride #awareness #acceptance
Posted by Global Special Education Initiative at 2:26 PM No comments:

Factors That Influence the Impact of Child's Disability on the Family

Although this is not an exhaustive list, these are factors that influence the impact of a child's disability on the family unit:

Every family is different,  so the true impact of a child's disability can only be accurately measured on a case by case basis. However, an assessment of the family's needs should be done in order to determine the best resources to use to improve their overall quality of life.
Posted by Global Special Education Initiative at 6:30 AM No comments: 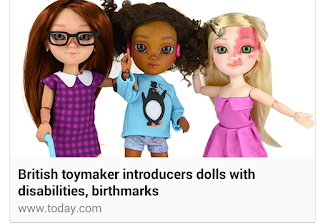 We need to start early educating our children about the importance of #acceptance...and the task is one that should be delegated to parents, teachers and any other adult with a vested interest in the lives of our children. Remember, no one should have to ask for acceptance; it should come automatically. Our differences are what make us special and should never be used to make us feel ashamed, degraded, ostracized or rejected. #earlyeducation
Posted by Global Special Education Initiative at 7:37 AM No comments:

The Oddballz: MusicTherapy for Children with Disabilities

Music therapy has been used to support social, cognitive and language development for children with disabilities. The use of music therapy has become increasingly popular, especially for children with autism spectrum disorders. According to the American Music Therapy Association (2012), "Music is a very basic human response, spanning all degrees of ability/disability."

As a special educator and mother of  two children with autism,  I am always looking for music that will captivate and promote learning.  I was browsing YouTube for music and came across a picture of a cartoon boy in a wheelchair and was curious.  I clicked the link and was immediately surprised by how high-energy the music was with a modern up-tempo beat and knew right away it would be a hit with my kids, but it was when the song ended that I was even more impressed.  I went to the website associated with the account and discovered a program called "The Oddballz."  Previously, I had never thought of a program aimed specifically at accommodating students with disabilities. The Oddballz allows children with autism spectrum disorders the traditional benefit of music therapy.  Additionally, it deepens their investment in the therapy by specifically infusing the personally relatable status of disability.

The Oddballz offers the benefits of music integration while promoting awareness and acceptance of children with special needs. Their program takes the "dis" out of disability by utilizing popular children's stories and songs. By incorporating a creative flare, the programs offered will get grab your kids' attention and engage them in the learning process. The resources are so diversified that children with and without disabilities will enjoy following the stories and moving to the music! The site is so awesome; I plan on using the resources at home and potentially integrating it into my classroom activities! I would encourage anyone who works or lives with children on the autistic spectrum, or those who have a disability, to visit http://www.theoddballz.com and take in and enjoy lively music and charming characters created with our wonderful children in mind.